The first to arrive were a little nervous. A bad-tempered gale had been blowing all day. Rain – albeit not quite biblical – had been forecast, although in the event there were just a few half-hearted spots. The autumnal spirit of the day was amplified by the red berries that had stubbornly resisted earlier attempts to clear them – and lay in ambush on the ancient York-stone path, waiting to be squelched and walked into the Church. It was too early for a loud and slightly louche Christmas party. What would the evening entail? Would it be dull? A worrisome case of “more tea, Vicar”?

The initial hesitancy of the ‘early-bird’ attendees quickly evaporated. Lefty and Tricia Wright had set up a bar just behind the pulpit which, although not quite trendy Soho, was clearly not going to run dry. Half cases of wine were stacked against the wall like sandbags in preparation for a hurricane. It was clear that there would be no-one leaving the evening who could legitimately claim to have been inadequately refreshed.

It was, however, not just Bacchus and his acolytes who were on form. The less-well-known – but just as important – gods of delicious, home-made nibbles were also well represented. There were definitely those canapés which, even for non-Catholics, made you feel a little spike of guilt as you munched, knowing just how many labour-hours had been poured into their perfect, paw-sized production. As more and more villagers – and past, lapsed-even, villagers – arrived, the canapés were not so munched as devoured as, after all, it was Friday evening. 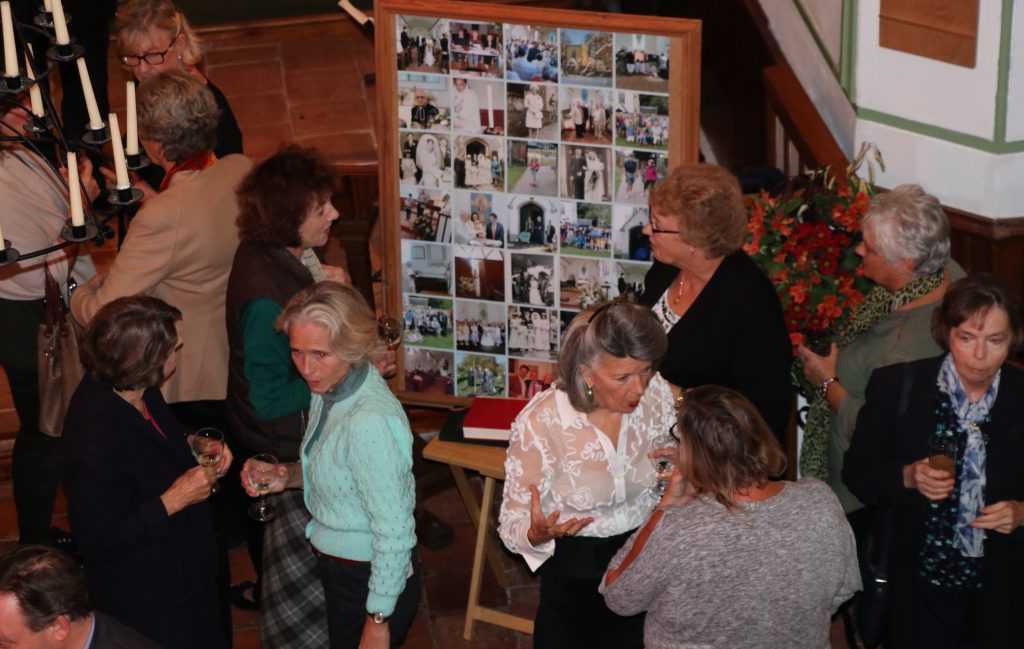 Not content with more-ish eats & vino, the atmosphere in the Church began to build, courtesy of the jealousy-inducing overtly-musically-talented Victoria on the organ. Not the ageing, slightly crinkly, Miss Faversham-esqe, in need-of-repair-&-tuning Church organ in the gallery – but her own electric ambiance-levitating magical black-box. (The bouncers had to fend off well-wishers swarming around Victoria who were trying to get her card for their forthcoming Yuletide bashes.) The timing of the soirée was carefully scheduled as the inside of the Church was looking its best, bedecked with glorious Harvest festival flowers. Beautiful flowers and melodic jazz. The stars were aligning: the evening was developing. There was no tea. 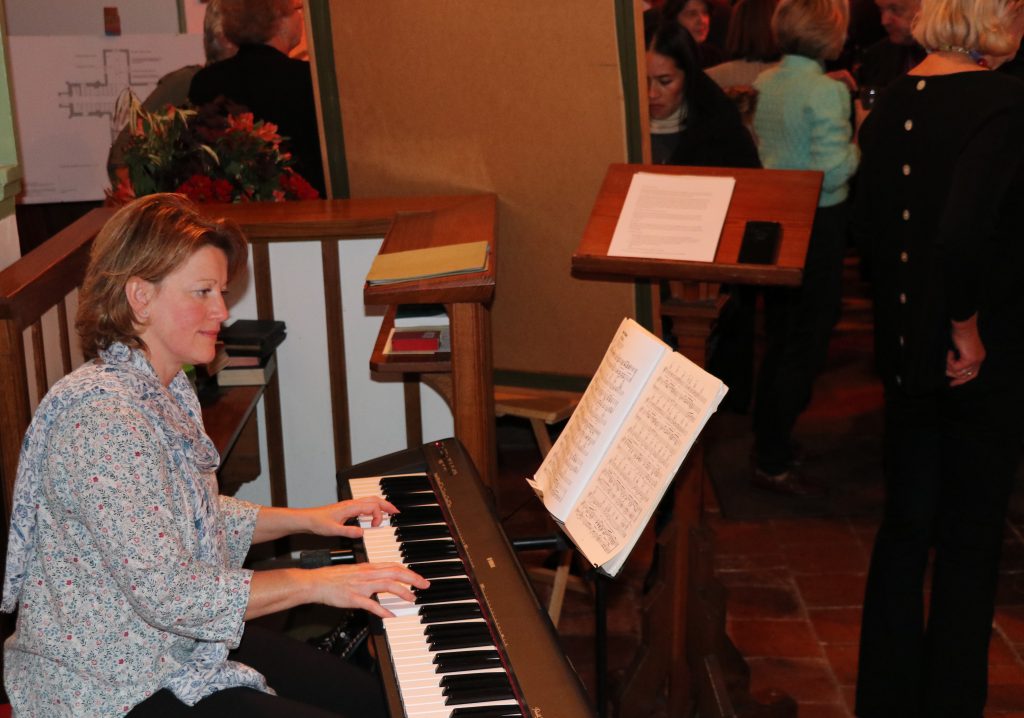 It was warm. The realists – and mild sceptics – who had shivered through previous St. Peter-in-the-Freezer gatherings looked over-dressed in their furs and Uniqlo best. The politically-incorrect, retro-looking wall-mounted heaters were on magnificent form, bathing everyone in a flattering spray-on-tan glow (although some were heard worrying as to whether it was not more an orange hue favoured by Trump). Somewhere in the distance there was a power-station doing an evening work-out – and the Church’s electricity meter was spinning like a Prima ballerina who had over-refreshed on Red Bull.

The party was beginning. The usual suspects were seen orbiting close to the Wright bar – hopelessly caught in an invisible tractor-beam. Youthful waiters were ruthlessly mugged for eats. Various posters – including a collage containing ancient pictures of the Church as well as beaming brides & grooms on wedding days from yesteryear – were inspected. The decibels began to climb. The crowd spread within the Church, hindered only by the pews – particularly in the North Transept – which emanated an almost silent aged-pine-groan of Victorian disapproval as the party atmosphere took hold.

And it was then – just as spontaneous dancing was about to erupt – that the former English teacher, better known as a top BBC presenter, struck with a hypnotic hand-clap. Decisive. Forceful. Pink-tied. The moniker Bruce Almighty hovering in the air. Even the most garrulous – catalysed by Bar-Wright – were silenced.

The first to speak was the Bishop of Basingstoke. Those who were a little upset that their cocktail party had been so abruptly interrupted relaxed as it became clear that he was North Hampshire’s answer to the Rev. Michael Curry (of Meghan & Harry’s wedding fame). He was up-beat, enthusiastic and believable. It was clear that he was a fan of the Church. He was four-square behind the renovations. Notwithstanding he had been in London all-day and it was the end of a long week, it was evident to everyone that he was happy to be there. It was also clear that he was only just starting..  … when he stopped.

Warm-up act over, Letitia Adams was given the floor. Following introductions of colleagues on the Fund-raising Committee and heartfelt thanks to the Magicians-of-the-eats and other helpers, the message was succinct and energetic. Sure, basic repairs needed to be done to the Church. But the real opportunity for St Peter-in-the-Wood – in addition to engaged community-support – was to access the large grant-giving organisations and trusts in order to renovate the Church and make it a usable space for the 21st Century. We did need toilet and basic catering facilities. We did need to clear the pews in the North Transept (replacing them with flexible alternative seating) and level the floor in order to create a larger space for all manner of meetings or events. It was going to be expensive – but now was the time to raise money and re-vamp the Church. Cometh the hour, cometh the community – and the funds. Please. 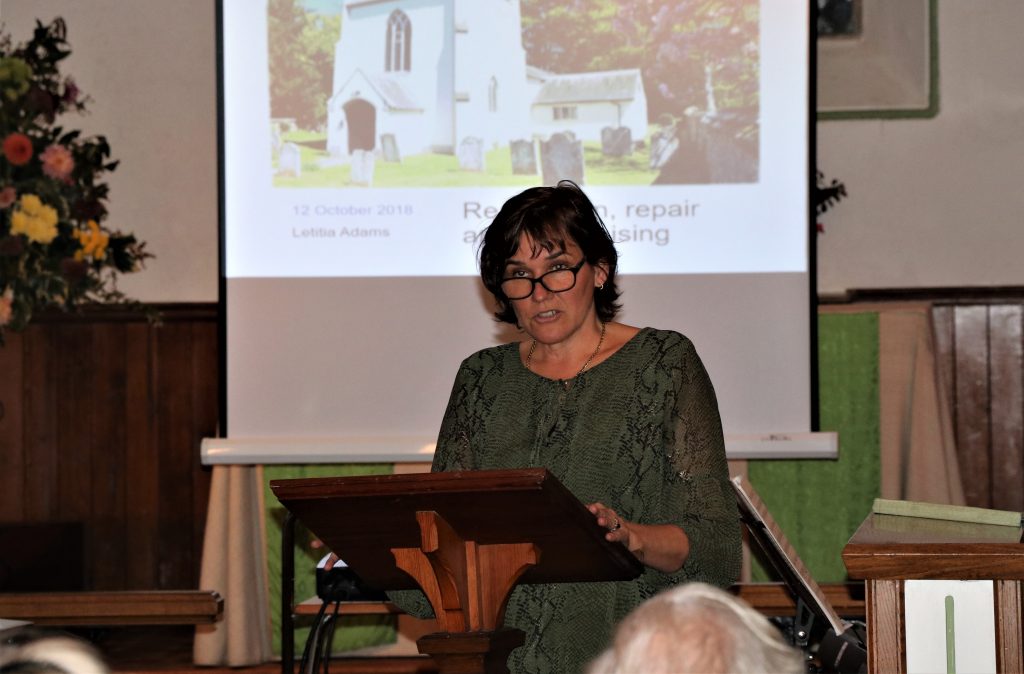 Simon Goddard – a specialist ecclesiastical architect – then explained in more detail what was needed, responding to questions from the ever-eloquent Bruce Parker (he of the pink-tie). Here was an expert who knew his ‘onions’ – or quinquennial reports. No smooth property-developer pitch – but someone passionate about old churches who had given up his Friday evening to share his expert knowledge with villagers and other friends of Appleshaw Church. 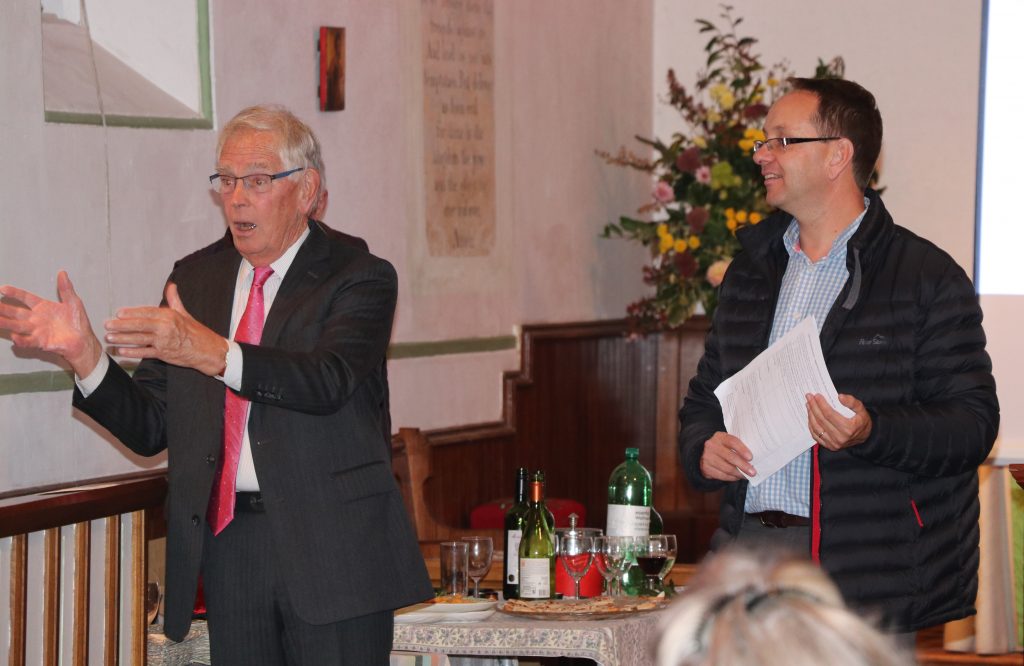 Bruce closed the formal part of the evening after responding to questions with a personal tribute to the Church. He added that, yes – we were looking for donations, and twenty quid a month over five years, taking into account Gift-Aid, was real money for the Church renovations. But if you were not in a position to support the Church financially, then please support it – and the fund-raising – in any way you could. This was not a vulgar, crass money-grab – but the opportunity to meld a renovated Church with the local community in a more holistic way.

There was applause – a pause – and then the hubbub resumed, the eats-proffering waiters mugged, the glasses re-filled and the Wrights’ half-case-sand-bags depleted. It was definitely more “another glass, Bishop?” than “more tea, Vicar?”. As the evening progressed and some started to drift away, the mildly orange-toned warmth from the Church continued to spread – out of the door, the leaky windows, the holes in the plasterwork, the cracks in the roof – and started to permeate throughout the village and beyond. A little later, when the last to leave locked the door of the Church, it was clear that the Spirits of the Church-yard – both recent and ancient, possibly Roman – were going to carry on the party throughout the night… … a warm-up for Halloween, perhaps?

If you would like to make a donation towards the renovation of the Church then please download a fund-raising form by going on the website www.appleshawchurch.com (Click here to download a Donation and Gift Aid form for donations to Appleshaw Church renovations) or by emailing Letitia Adams at [email protected] 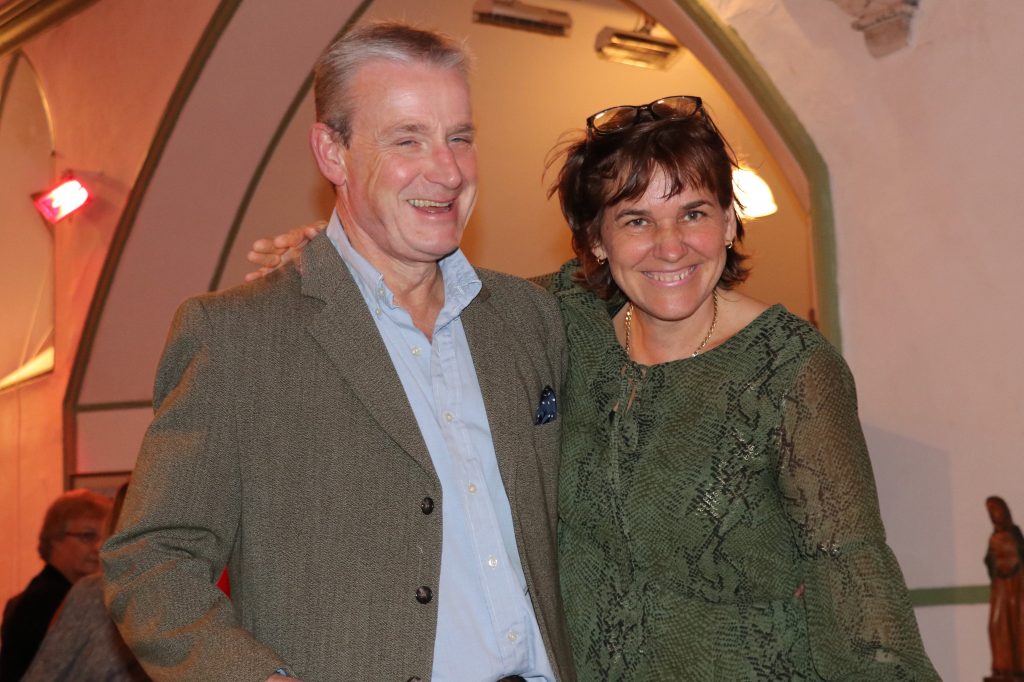 A truly brilliant summary f a very suxxessful evening. Why aren’t you a journalist? 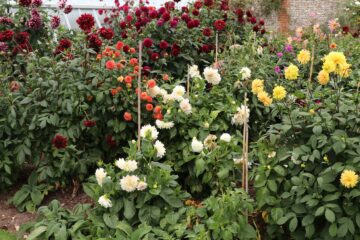 It wasn’t just the Dahlias that were stunning. And £1,000 was raised for the Church 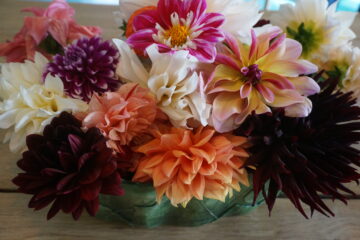 Back by popular demand… … a quiz night, jointly organised by St Peter’s PTA and St Peter’s PCC (the ecclesiastical equivalent of the PTA. Sort of.) Last year’s quiz night was good fun, got mildly Read more…